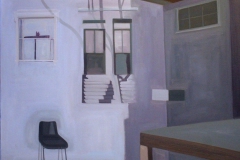 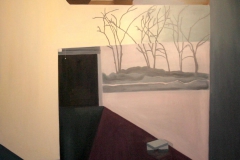 The oil paintings A Multitude of Seeing (2016 – 2017) were made through multiple stages of transferring what I see onto canvas. A Multitude of Seeing III and IV were site specific to Harts Lane Studio Gallery, venue for the exhibition Room 101. I took pictures of the neighbourhood of the gallery at New Cross Gate, then projected some these images onto the wall of the exhibition space. I subsequently took pictures of the projection in the room, followed by painting selected elements from the pictures onto canvas. The paintings were finally shown in the actual space again hence adding another layer of ‘seeing’ into the work. 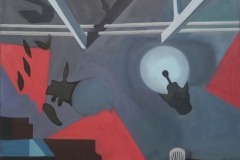 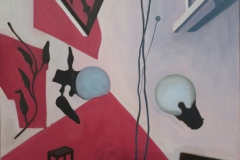 The oil paintings A Multitude of Seeing 2016 were made through multiple stages of transferring what I see at IKLECTIK Art Lab, London where I worked. Inspired by my continuous experience in this place where I often see projections of found objects projected onto walls as backdrops to musical concerts, I transferred these theatrical sceneries onto canvases. Combining projected images and real objects like structural beams, tables and chairs, things are re-presented in distorted perspectives. In the exhibition The Weather Forecast 2016, these paintings were shown in the actual space IKLECTIK where the series of work was inspired by, hence adding another layer into the work based on the concept of seeing through the eyes of the viewers. 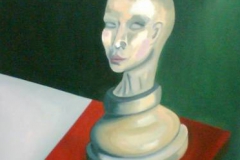 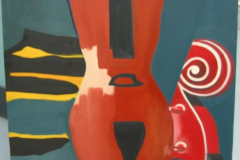 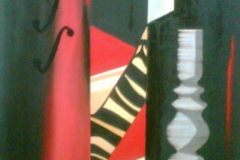 Paintings based on sketches made of paper collages. 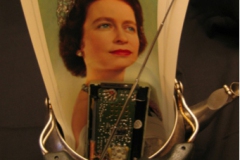 The Queen’s portrait was found in an old disposed file cabinet given to me by a friend who got it from the government office that she worked in. I juxtaposed it with parts of a dismantled radio and a kettle. 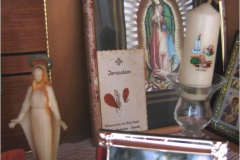 The objects are collections by my late grandmother who was a catholic. She used to have a little altar at home which was like an emotional sanctuary. 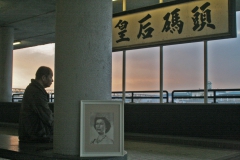 Demolition of the Past 2007 HK / Materials: Digital Photography on Paper

Photograph was taken in May 2007, just before the Queen’s Pier in Hong Kong was demolished. The Queen’s portrait is a photographic transfer print (Van Dyke print).